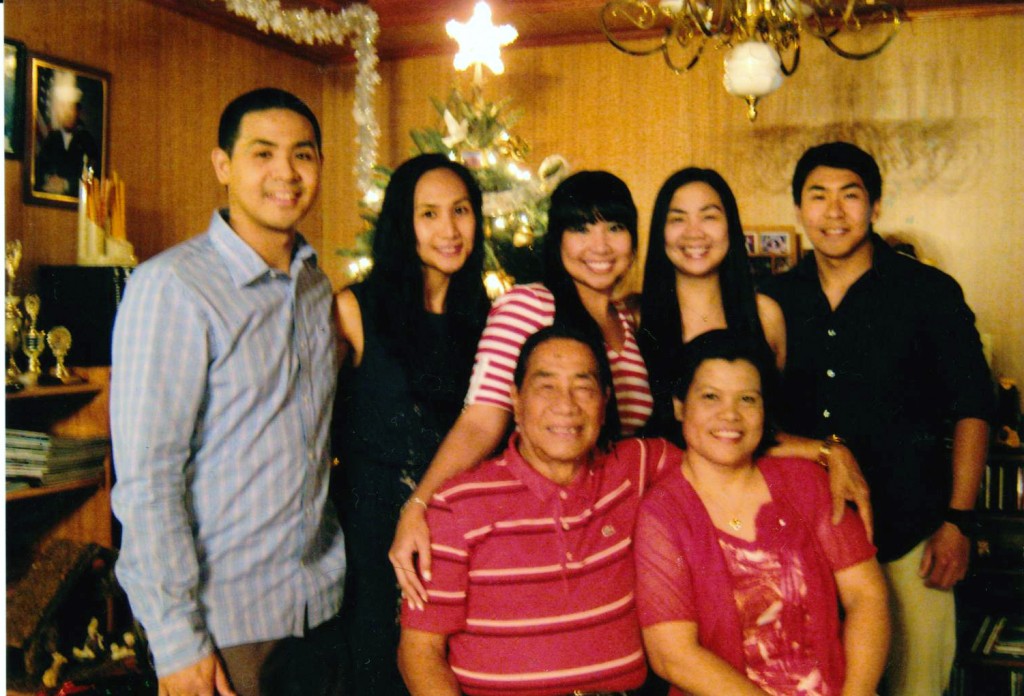 The wonderful Zabala family. Front Row: Rolly and his beautiful wife, Claire. At the back are Rolly’s kids (L-Right): Rolando II, Violeta, Rosalyn, Elizabeth, and Roderick.

They say that a man on a mission is hard to stop. You would definitely know you are in the presence of one, when you’re around someone like Rolando Zabala or just simply “Mang Rolly.” Many would say that he is intimidating and intense but those who are fortunate enough to have worked with him would simply say that he exudes a strong aura of a man who simply wants to be of service to God and his fellow men.

The Roots of the Leader
Guam has become a second home and an unlikely place for someone like Mang Rolly to be in, despite of his pro-active trait and purpose driven character of becoming a leader. He was born and raised as a Catholic in Urdaneta City Province of Pangasinan in the Philippines, where remnants of his childhood, education and traces of his family sits back.

As a student, Mang Rolly was already showing signs of Leadership and Wit, consistently belonging to the honor roll from his freshman year to senior year in Urdaneta City Highschool, graduating in 1958. He majored in Economics and Political Science studies with minor in Marketing and Management in University of the East, Manila, Philippines where he graduated in 1968.

His Economics and Marketing degree paved the way for him to become the organizer and president of the then biggest marketing cooperative in the Philippines which is The Pangasinan Federation of Cooperatives/Marketing Cooperative that he led for four years, from 1971 to 1975.

The Calling
He was at the height of his career as a marketing guru at the age of 37 when he left the Philippines on December 6, 1975, three years after the martial law was declared in 1972, where the people of the republic learned to fear military hostility under the dictatorship of Ferdinand Marcos.

It was a difficult decision for him to leave since he has always loved his country. He was hesitant since he’s doing pretty well with his life and career and never imagined himself to be living somewhere else. As matter of fact, the day Mang Rolly arrived at the US soil is also the expiration date of his visa. Mang Rolly was brought up as a brave, God-Fearing, family-oriented man and the political situation that the people were facing at that time did not, in any way discourage him from living and pursuing his dreams in the land where he was born.

But sometimes, no matter how we plan our life, there will be some things that will be hard for us to ignore that will make us choose the other path. And Rolly Zabala was destined to leave the country, and do greater things soon after.

Mother’s Prayer and a Friendly Advice
It was his good friend Amadeo Perez, Sr. (the Mayor of Urdaneta, Pangasinan at that time) who encouraged him to leave. But the biggest influence on his decision was none other than his mother. Maybe it is mainly because we as Filipinos know that “Mother knows Best.” It was his mother’s begging and crying that brought out the soft side of Mang Rolly, which convinced him to relocate his family in the US. He chose Guam in particular because he has some family members here and it is near the Philippines. It was indeed an answered prayer of a mother who wished nothing but to bring the family together.

Starting Anew
It was not really easy to start anew. In fact, it was really tough for Mang Rolly to begin another chapter of his life in a foreign country. Difficult as it may be, he started out as a lowly employee of Guam Reef Hotel. It is a far cry from what he left in the Philippines, where he already has made a name for himself as a respected businessman and also a newspaperman. But he has to do it. He has to start again, and start at the bottom at that. But Mang Rolly’s positive attitude and clear qualifications landed him a job as a staff assistant to Senator Ernesto Espaldon at the Guam Legislature in a matter of days. He has been with the senator form 1975-1978.

Career Highlights
His stint with Senator Espaldon’s office brought Mang Rolly to his career. He worked as a Community Liaison Officer for Legislature (1978-1980), Assistant to Congressman Ben Biaz of the House of Representative (1984-1987), and Security Police Supervisor of Guam Airport Authority as a ranking Lieutenant (1980-1994).

There is no way but up for a man with a vision, integrity, and right values. In 1995, he became the Deputy Director of The Department of Labor where he managed the entire operations of the bureau until his retirement in 2002.

Then, Mang Rolly thought he is too young to retire. Thus he took on a job under the Congresswoman Madeline Z. Bordallo’s District Office as Constituent Services Representative from 2003 to 2005.

A Leader
Leadership is just flowing in his blood. Once a leader, always a leader, as they say. He has been the Vice President of Filipino Community of Guam (FCG); President of Pangasinan Association of Guam; President for five terms of Wettengel Elementary School PTA; and Executive Vice President, island wide, of the Guam Parents Teaches Organization from 1989-1992.

Multiawardee
Surely, everybody can see what this man is made of. And it is but difficult to ignore and put aside his achievements and good deeds. Thus, he earned himself one of the many prestigious awards that he had from the Government of Guam such as “The Most Outstanding Public Service Award” for the year 1989-1992. He was also given the “Most Outstanding Community Service Award” in 1992.

Continuing His Mission
“To be a proactive leader in improving the quality of life of all people and to render service to humanity and God Almighty. To be committed to an honest and good government.” This is what Rolando P. Zabala or Mang Rolly is made of, as this objective is him.

He is a man of God. An alumnus for the UE Red Warrior. Honest and a truthful leader. Pinoy. A father and a brother. A man on a mission, that continuously aims to inspire and hope for the people.

His advice to the newcomers on Guam is simply strive hard, work hard, be smart, and work yourself to the top and be the best person that you can be. Do not be afraid and do not ashamed to start at the bottom.

To you Mang Rolly, long live. We are proud of you and Mabuhay ka!