Browse: Home / Imelda pulls off a surprise in COMELEC by wearing red dress with yellow 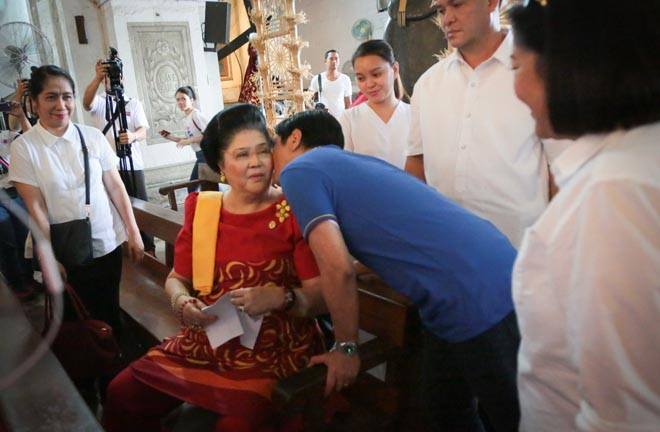 Mrs. Marcos went to the COMELEC to show her support for her son, Senator Ferdinand “Bongbong” R. Marcos, Jr., who filed his certificate of candidacy for the position of Vice President in the 2016 polls.

Red is the traditional color associated with the political life of the Marcos family while yellow has been tied to the family of incumbent President Benigno Aquino III.

When asked by members of the media why she was wearing something with yellow, Mrs. Marcos said it symbolizes the unity of the Filipino nation.

It could be recalled that when he formally declared his intention to run for Vice President, Senator Marcos said the central theme of his candidacy revolves on his quest for unity of all Filipinos.

Marcos had lamented that adversarial politics and the policy of going after political enemies adopted in the previous administrations have caused a plethora of problems that until now is plaguing our country and making life more difficult for our people.

Senator Marcos came to the COMELEC wearing a blue shirt with a white collar, while the sleeves and front pocket had yellow and red lines.

For her part, Mrs. Marcos said she fully supports the vice presidential bid of her only son and that she is willing to do her share to help realize his vision for our country.