NOVEMBER 18, 2015 – The last stroke to recall the salary increases of elected and appointed government officials was voted down by the Legislature, 8:7. A lot of Guamanians were disappointed while majority of the senators stood their ground.

Democratic Senator Michael F. Q. San Nicolas, who filed Bill No. 204-33 together with four others, said he is very disappointed with Republican Senator Brant McCreadie saying his affirmative vote “would have accomplished it.”

Bill No. 204-33 seeks to restore the salaries of elected and appointed officials to levels prior to PL 32-208. Alongside Nicolas’ Bill was McCreadie’s Bill 201 excluding of the senators from the Competitive Wage Act of 2014, and Bill 202 seeking senators’ repayment of retroactive salaries disbursed under PL 32-208.

November 13 – The three bills were simultaneously heard in an emotionally-charged public hearing that lasted around 6 hours. Governor Eddie Baza Calvo showed himself up three hours into the hearing to the cheering of his supporters that filled in the public hearing room – his cabinet officials.

But what really is this salary increase fiasco about? How did it reach this stage? 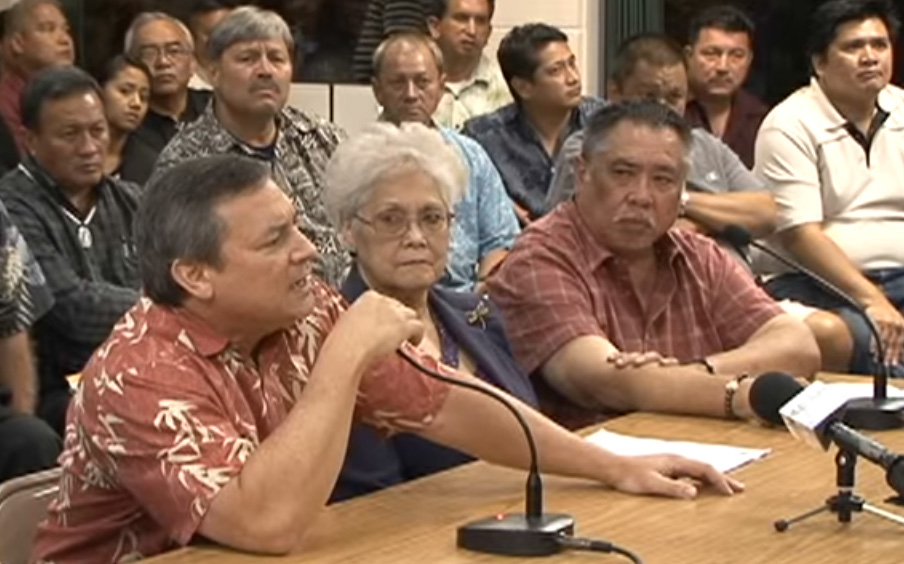 The Hay Pay Plan
James W. Gillan, the current Director of the Department of Public Health and Social Services (DPHSS), as part of his written testimony for the November 13 public hearing summarized the chronology of the Hay Pay Plan (some details are from our documentary research):

Aug. 31, 2006: Executive Order 2006-21 (by then Governor Felix P. Camacho) orders DOA (Department of Administration) to obtain a private firm to conduct a comprehensive compensation review to update the Unified Pay Schedule, which was implemented/developed in October 1991. This Unified Pay Schedule was put together by the Hay Group (Hay Study).

Jan. 3, 2008: PL 29-52 (section 13) appropriates $500K to contract a consultant which would conduct a study of all GovGuam positions “including those in autonomous, semi-autonomous agencies, public corporations, and all instrumentalities, and the judiciary.” This was authored by then Senator Eddie Baza Calvo (who was also the Acting Speaker). Lt. Governor Ray Tenorio was also a senator and the Secretary of the Legislature at that time.

May 2010: Hay Group presents its draft study/report to Legislature. The study presented six pay plans – Executive Pay Plan (Governor, Lieutenant Governor, and Judges); Nurses; Law Enforcement Officer; Educator; Attorney; and General Plan. Those positions not included in the 6 pay plans were identified and “Rate of Pay” positions. This would include the Governor, Lt. Governor, Judges, Attorney General, Public Auditors, Mayors, and Vice Mayors. It is important to note that the Senators are NOT in included in any of the pay plans.

July 13, 2010: Bill No. 439-30 (budget bill that includes funding for the implementation of the 2009-2010 Hay Classification, Compensation and Benefit Study) is introduced by Gov. Camacho. This was passed on August 20, 2010. .” Then Senators Eddie Baza Calvo and Ray Tenorio voted against the bill. Senators Frank Blas, James Espaldon, and Telo Taitague did not make any vote.

Sept. 1, 2010: Governor Camacho signs Bill No. 439-30 into Public Law 30-196 (The Government of Guam Competitive Wage Act of 2011). The amount of $13-M was appropriated for the implementation of the Hay Classification, Compensation and Benefit Study. The appropriated funds, this law says, “shall be used only for the salary adjustments of permanent classified personnel filling authorized full-time equivalent (FTE) position” and that it did “not include position(s) such as unclassified personnel, limited term appointees or any personnel under non-permanent status.” PL 30-196 provides that the Hay Study recommendations shall be effective only upon formal adoption by the Governor of a plan consistent with the study.

September 23, 2010: Governor Camacho signs E.O. 2010-24 adopting the Hay Study and instructing the DOA to implement it “upon an additional legislative appropriation of $5.5 Million and availability of funding.”

June 6, 2013: Governor Calvo signs E.O. 2013-005 serving notice to the Legislature of the use of the 2% reserve for FY 2014 for the incremental and phased-in implementation of the Hay Plan beginning FY 2014 subject to cash flow availability. The Governor also instructs the Director of Administration to be begin preparing and making all necessary updates and adjustments to the Hay Plan.

Sept. 11, 2013: Budget bill is signed into PL 32-068. Chapter XI Section 1 (Competitive Wage Act of 2014) repeals Chapter XI Section 7 (Competitive Wage Act of 2011). It directs the Governor’s office to transmit to the Legislature a final, implementable plan to adjust compensation, classification, and benefits for Legislature’s approval. The amount of $7-M was appropriated for its implementation. The Governor was given a January 15, 2014 deadline to submit the plan. The implementation shall be effective 30 calendar days after receipt by the Speaker unless disapproved or amended. The Legislature may approve, disapprove, or amend the plan prior to effective date to ensure that that it is implemented fairly and consistent with the appropriated amounts. The Governor is not happy with the budget bill. He signed it with heavy heart. The Legislature did some cuts on his proposed budget. It was unanimously passed. 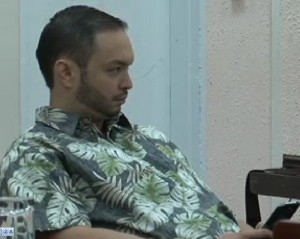 January 24, 2014: Sen. Michael F.Q. San Nicolas files Bill No. 268-32 approving DOA’s implementation plans of the Competitive Wage Act of 2014, but requiring a performance-based standard for Directors and Deputy Directors of line agencies, the Governor and the Lt. Governor. The bill seeks not to increase the Senators’ pay as per Hay Pay Study. It also sets the salaries of Mayor and Vice Mayor to the Hay Study recommendation. As to the Governor, Lt. Governor, Attorney General, and Public Auditor, the bill seeks to maintain their 2010 salaries and the remainder of the recommended pay shall be paid pursuant to the provisions of the Performance Pay Plan criteria as provided in the bill. This means, these officials’ additional pay is tied up with their performance. This bill was passed February 1, 2014, with nine yes votes and 4 no votes (V. A. Ada, C.M. Duenas, M. Limtiaco, and T. Morrison).

February 13, 2014: Governor Calvo vetoes Bill 268-32, saying he “objects to this interference on executive functions.” The Governor pushes for the implementation of the Hay (Study) Plan effective February 14 according to Competitive Wage Act of 2014.

February 20, 2014: Sen. Pangelinan introduces Bill 278-32. It repeals salaries of elected leaders and cabinet members, pegging them to Oct. 1, 2013 rates. The bill got 11 yes votes (Senators T.C. Ada, F.B. Aguon, B. J. Cruz, C.M. Duenas, M. Limtiaco, T.R. Muna-Barnes, V.C. Pangelinan, R.J. Respicio, D.G. Rodriguez, M.F.Q. San Nicolas, and J.T. Won Pat) and 4 no votes (Senators A.A. Yamashita, T. Morrison, B, McCreadie, and V.A. Ada). This was passed on same day. Public hearing was waived. This lapsed into PL 32-136. The Governor stated he disagrees with it but there has been enough discussion on the subject. He then said he hopes “the Senators will direct their attention and efforts to our schools, our homeless and foster children, crime, and the other important issues.”

Nov. 21, 2014: Right after election, Lt. Governor Ray Tenorio calls the Legislature into session, introduces Bill No. 1 (8-S) to repeal and reenact PL 32-136, setting salary rates according to Competitive Wage Act of 2014. In this turn of events, the bill was passed signed into law the same day as Public Law 32-208. It was passed with 10 yes votes, and a solitary no vote (Michael Limtiaco). Three senators were absent at that time (T.C. Ada, D.G. Rodriguez, and M.F.Q. San Nicolas). Public hearing was waived with a justification that a public hearing was already conducted for a similar bill. This is the law that is the subject of controversy to this date.

January 5, 2015: Senator Michael F.Q. San Nicolas introduces Bill No. 4-33 (LS) which seeks to restore salaries for elected officials and cabinet members prior to PL 32-208, prevent waiver of public hearing for bills proposing salary changes, and for any change in salary for elected officials to take effect before a general election. Again, this was overwhelmingly voted down.

The series of recent events lead to the formation of a civil society group, Guamanians for Fair Government which has been actively opposing the salary increases of elected and appointed officials. And while the legislators may have thought, the people will forget, it was just the opposite. The opposition continued to brew and issue just wouldn’t go away.

October 30, 2015: Senator Brant McCreadie files Bill Nos. 201 and 202 to echo Aguon’s failed bill to exclude the senators from the Competitive Wage Act of 2014 and for the senators to repay the retroactive salaries disbursed under PL 32-208. McCreadie tried to do away with public hearing but failed.

On this same date, Speaker Won Pat urges Senator Michael F.Q. San Nicolas who has been in the forefront against the salary increase “to do the right thing” and bring the issue to public hearing. San Nicolas then introduces Bill 204-33 together with Speaker Won Pat, Vice Speaker Cruz, and Senators Underwood and T.C. Ada. This bill seeks restore salaries of elective and appointed officials to levels before PL 27-05.

Calm in the midst of chaos
Public hearing was conducted. It was a perfect attendance for the senators.

A cross section of Guamanian voters finally had the chance to talk face-to-face with the legislators and express their concerns, disappointments, and disgust.

But the supporters of the pay raise did not take things sitting down. The government offices’ heads of office filled the public hearing room hours before the scheduled hearing leaving little to no room for the supporters of the bill. And they didn’t yield to San Nicolas’s request to give seats to those who signed up to testify. Instead, they jeered and booed.

San Nicolas was practically ridiculed, they tried to cut him down to pieces. But he remained calm and focused. Sticking to the point – “we cannot afford it.”

Voted down
But despite the overwhelming voice of the people to repeal the raises, the Bills failed.

San Nicolas voted in favor of McCreadie’s bill, but the latter did not reciprocate.

In Kuam News’ interview with San Nicolas right after the voting, he said “I am very disappointed that Senator McCreadie did not follow through Bill 204 and vote yes on it because if he was sincere in his attempts to rollback of raises for senators, that would have accomplished it. Now we are back to square one.” “This was my final best attempt to bring the same matter to the floor in a different way and now it’s up to our voters to decide on the election how they feel about us not rolling back these raises,” he adds.

“We came within one vote. Every vote counts. Thank you to my colleagues who bravely joined me on this effort in the face of enormous confrontation. Leadership in adversity is true public service,” said Senator San Nicolas in press release. “In a democracy the people rule. This issue is now in the hands of our voters to affect in the coming election.”

When the bill was debated on the floor, Senator Underwood said, “Right after election, his first action as Lt Gov was to reinstate pay raises and to pay retroactive pay. That was his bill that he transmitted to this body. If we want to pull back these raises because of the elected officials who did it, we have to go back to the source, and the source is Ray Tenorio.”

Tony Ada on the other hand has a different view. He said if salary raise is an issue, it should have been looked at when the budget was passed. He added that the Legislature should look at the agencies themselves and look at where we can cut spending. “If we really want to look where the bleeding is at, let’s look at the agencies.”