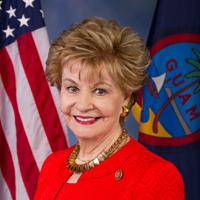 Guam’s retired government employees would be living a more comfortable life if Delegate Madeleine Bordallo’s bill on social security, finally becomes a law after it found its way last week to the US Congress.

The congresswoman said that the average $40,000 saved in the account of GovGuam employees for retirement “won’t be enough to support their basic needs come their retirement age.” This is based on a 2011 report by the Office of Public Accountability (OPA).

Bordallo said she would work closely with her colleagues “to move this bill through the legislative process.” She had earlier coordinated with the Social Security Administration.

Government employees are covered by GovGuam under the “defined benefit retirement plan”  but they don’t have options to pay into and receive benefits from Social Security, according to Bordallo.

Even employees covered by GovGuam’s defunct “defined benefit plan” need to enroll when the government adopts the new Social Security system. The previous plan, however, was closed on Oct. 1, 1995 and covered only those government employees who enrolled before Sept. 31, 1995.

Under the old system, employees are ineligible for full social security as their annuity benefits do not allow them to fully benefit from social security.

This means that employees are “forced” to pay for the plan but they get no benefits upon retirement.

Bordallo noted that Guam and American Samoa are the only US territories that don’t have social security for public sector employees. Bordallo said she hopes to get the nod of her colleagues in Capitol Hill for the approval of the bill.

“Anytime you see certain benefits given to a couple of territories, it makes my job easier to fight for equal opportunities,” Bordallo was quoted as saying in a published report. “So this is one good point as I have been going forward.”

The bill is known as an “Increase flexibility in the extension of the social security program to Guam.”

“The Social Security Amendments of 1960 provided the Government of Guam with the authority to enroll all of its employees in Social Security. However, the statute does not provide Guam with flexibility to determine a date at which new employees would be covered. As the statute currently reads, all employees, regardless of years of service or ability to make up enough quarters to qualify for Social Security benefits would have to be enrolled,” Bordallo explained, in a statement.